Warning: Creating default object from empty value in /home/customer/www/perihla.com/public_html/wp-content/themes/Avada/includes/avadaredux/avadaredux-framework/AvadaReduxCore/inc/class.avadaredux_filesystem.php on line 29
 Top Places to Visit in Barcelona Out Of the City Center - Perihla Travel Guides 
Warning: A non-numeric value encountered in /home/customer/www/perihla.com/public_html/wp-content/themes/Avada/includes/dynamic_css.php on line 6753

Top Places to Visit in Barcelona Out Of the City Center

Home/Europe, Travel Guides/Top Places to Visit in Barcelona Out Of the City Center

Top Places to Visit in Barcelona Out Of the City Center

Although a lot of the Barcelona attractions are near the city center, there are few very important city landmarks out of the La Rambla and its neighborhood. So don’t stick to the city center, but explore other areas as well, and you will get the whole picture of this beautiful city.

Sagrada Familia is an unfinished temple, a church and one of the most striking and remarkable sights of the city. Sagrada Familia is in a way a synonym for Barcelona. If you can visit just one sight in Barcelona, Sagrada Familia should be that sight. Related to the church is another synonym for the Barcelona, and that is the main architect who worked on the church – Antoni Gaudi.  A year after the start of the church’s construction he became the architect and from that moment until the end of his life (he died in 1926) he dedicated himself to the construction of churches. Construction of the church began a long time ago, in 1882 and is still ongoing.  As the late 19th-century industrialization began to emerge, people in huge numbers started moving away from the original and traditional Christian values. Therefore, it was decided to build an enormous church to gather the people and to restore the old lost values. This is why the church was given a symbolic name of the Sagrada Familia (Holy Family), in order to emphasize the central role of the family within the society. There are plans to finish the works on the church in 2026 on the 100th anniversary of Gaudi’s death, but it is still not 100% sure. There are even rumors that there are no intentions to finish the church since the whole mystery about the length of the construction of the church gives it the necessary dose of attraction for tourists from around the world. 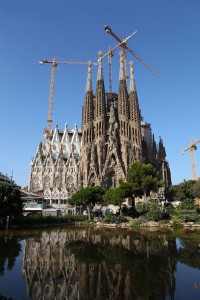 On the other side, the continuation of the church’s construction after Gaudi’s death was the subject of fierce debates between the two sides: the ones thought that the construction of the church should continue after Gaudi’s death, while others (among whom was Salvador Dali) advocated the preservation of the work as it is, since everything that would come after Gaudi would look ridiculous. Before the trip, I read about those opinions who advocated the abruption of the construction and I found it weird since I thought that everything that is started needs to be completed as well. However, when I personally saw the church, I was not sure about that anymore.

While Gaudi was alive, one of the three facades and one of the 18 towers were finished, since that is exactly how much it was estimated for the church to have. The four towers on each of the three facades would represent the 12 Apostles; four towers would stand for four Evangelists, one tower for Virgin Mary and the last for Jesus Christ. The tower dedicated to Jesus Christ should be 170 meters high which would make Sagrada Familia the tallest church in the world. Thus, the construction of the church takes a very long time, both because of the size and because of various other circumstances, and Gaudi had the occasion to say when asked about the amount of time it takes to build it: “My client does not hurry.” Gaudi very often changed the construction plans, that is, he mainly worked from day to day so that after his death he left not many drawings, and most of them were destroyed in the Spanish Civil War. Since he did not leave many sketches and a lot of work that needed to be done, those who were in charge of the further construction of the church had to make the new plans. When I saw the church, I immediately noticed the difference between what Gaudi did and what they did after his death, since the later architects apparently did not keep Gaudi’s style. I cannot say that what they did was not good, on the contrary. But when you see the part that Gaudi worked on, you can’t help but be astonished. It is impossible for anyone to stay indifferent when seeing such a piece of work. What he did cannot by any means being compared to anything that was later done. I have never seen such a magnificent work like this. Simply, it is something that cannot be described. No matter how many times you see Sagrada Familia on the pictures, the feeling you have when you personally visit it is incomparable. After visiting Sagrada Familia I changed my opinion on the continuation of works because they are not far from the truth when they say that adding anything to Gaudi’s work can only spoil it.

Sagrada Familia is several kilometers far from the city center. The entrance fee is 15 euros.

Nou Camp is the stadium of FC Barcelona, and one of the most beautiful stadiums in the world, so you should definitely visit it, even if you are not the lover of this sport. FC Barcelona was founded in 1899, and the founder and the first president was Hans Gamper from Switzerland. He came to Barcelona for work, but later decided to settle there, and given the fact he was a big fan of football, he founded the first football club in the city. In Barcelona, he is also known as Joan. FC Barcelona is one of the founders of the Spanish league, and it is one of the most successful football clubs in Europe and in the world. The rivalry with Real Madrid is particularly famous, and their matches are called “El Clasico”. According to the story that I heard, the great rivalry started after a semi-final cup some decades ago. Barcelona won the first match with the result 3-0, but after the first half of the rematch in Madrid, the score was 0-0. At the halftime, the Spanish police raided the locker room of the players of Barcelona and threatened them with imprisonment if they do not lose. Barcelona lost that match with 6-0, and from that match on, a big rivalry started. However, taking into the account the political situation in the country (more precisely, aspirations of Catalans for independence), all that happened throughout the history (Barcelona often had heavy pressure from the authorities in Madrid, especially under the Frank’s rule), and the fact that these two are the strongest clubs in Spain, I personally think that the great rivalry between these two clubs are unavoidable.

The stadium Nou Camp was built in 1957, and with a capacity of 99,354, it is the largest stadium in Europe. It is interesting that this name was only the nickname for years, but only since 2000 it officially got this name.

The entrance fee for the stadium and the museum which is located next to the stadium is 23 euros. Official data show that only from the visits to the museum and from the sale of souvenirs in the shop that is located in the stadium, this club has an annual income of over 20 million euros. The museum is dominated by the theme of the football club, but you may also see the trophies won by the basketball, handball and other sports clubs of Barcelona. In the museum, you may take a photo with the “trophy” of the Champions League if you pay the fee. I wrote “trophy” because it is not the original trophy, but a replica. The museum is very interesting. Among other things, there are lots of photographs from the rich history of the club, cabinets with trophies that were won, recognitions that the club received, Barsa’s jerseys from the 1899 and 1920, etc… There are also a few wax figures from some earlier times. So you can see how Hans Gamper looked in his office, or how a pay desk of the stadium looked like decades ago. The number of objects that remind of the past, such as tickets for the matches from some decades ago, is very impressive as well.

There is a big shop within the stadium where you can buy the Barcelona jerseys, shoes, scarves, hats, sweatshirts, t-shirts, hats, and many other souvenirs with the logo of FC Barcelona. 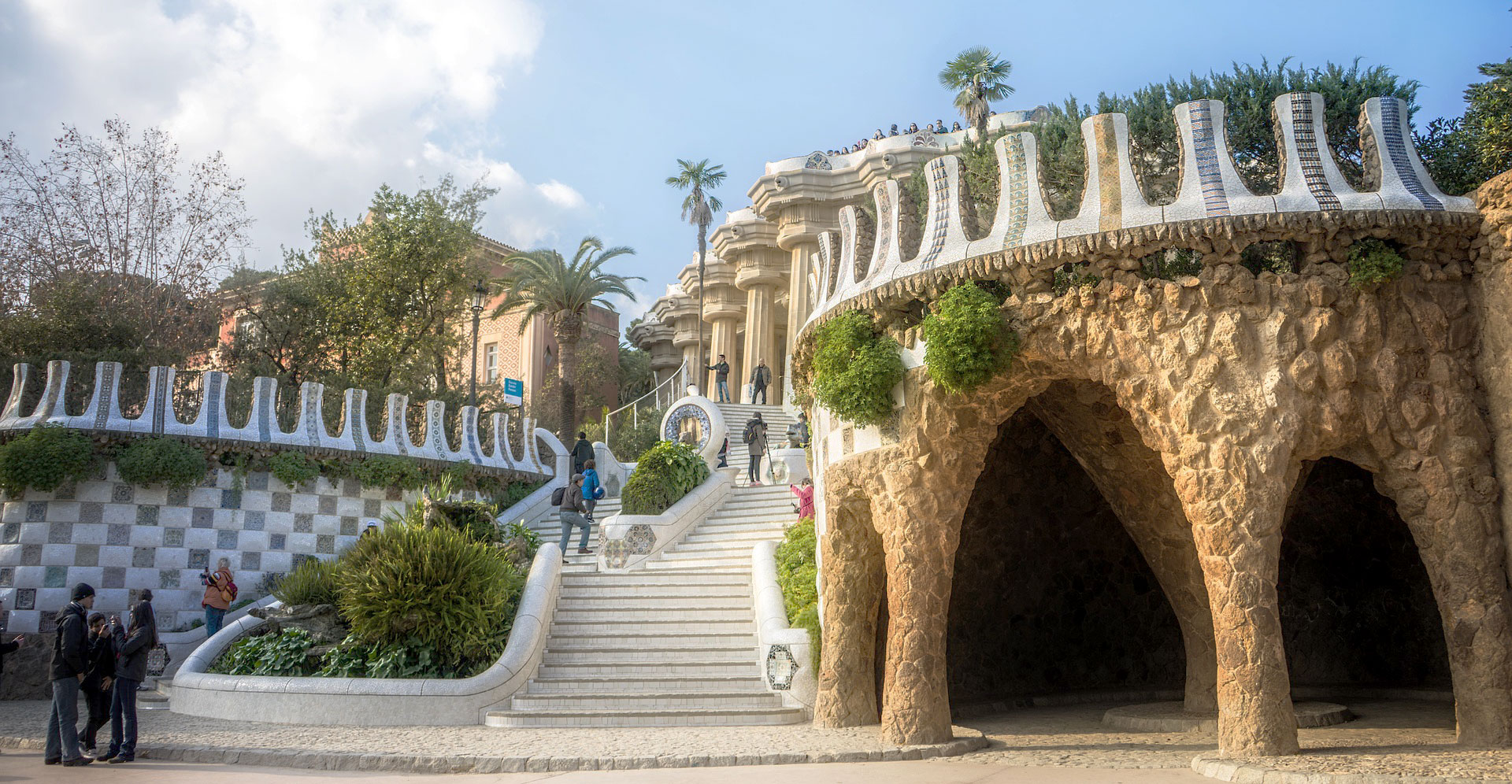 Park Guell is a famous park located on the hill of El Carmel in Barcelona. It is characterized by various interesting architectural elements, and it is important to know that when you decide to visit it, you must be prepared to cope within a sea of tourists who also want to see this attraction. The construction of this park was financed by Eusebi Guell, a rich Catalan industrialist, who engaged the help of the already mentioned Gaudi, whose works do not cease to thrill people from all over the world. Guell had a very interesting idea. He wanted to build a neighborhood in for the rich, far away from industry and pollution. The first idea of this project included building around 60 houses and several public objects. However, as there were no buyers, only two houses were built. Gaudi lived in one of them, and it is now a museum dedicated to him. After Eusebi Guell died in 1918, his successors did not share his vision, so they offered the park to the City Council of Barcelona, and they purchased it, finally opening a public park in 1926. As nature was the greatest inspiration for the architect Gaudi, the park includes many natural attractions and is very unusual in every aspect, so you will have the feeling that you stepped into a fairy-tale land. Park contains a number of amazing stone structures, paths, and fascinating buildings. There are also twisted columns and sculptures, altogether resembling the forms that can be seen in nature. On the top, there are terraces that offer spectacular views of both the park and the whole city. Also, you’ll notice that many of the sculptures in the park are lined with colorful ceramic pebbles, which is another characteristic of Gaudi’s creation.

The entrance to the park is free in general, but if you want to visit its Monumental Zone, you will need to pay 7 euros. This park is definitely worth paying a visit, and it is on the UNESCO’s World Heritage List from 1984. 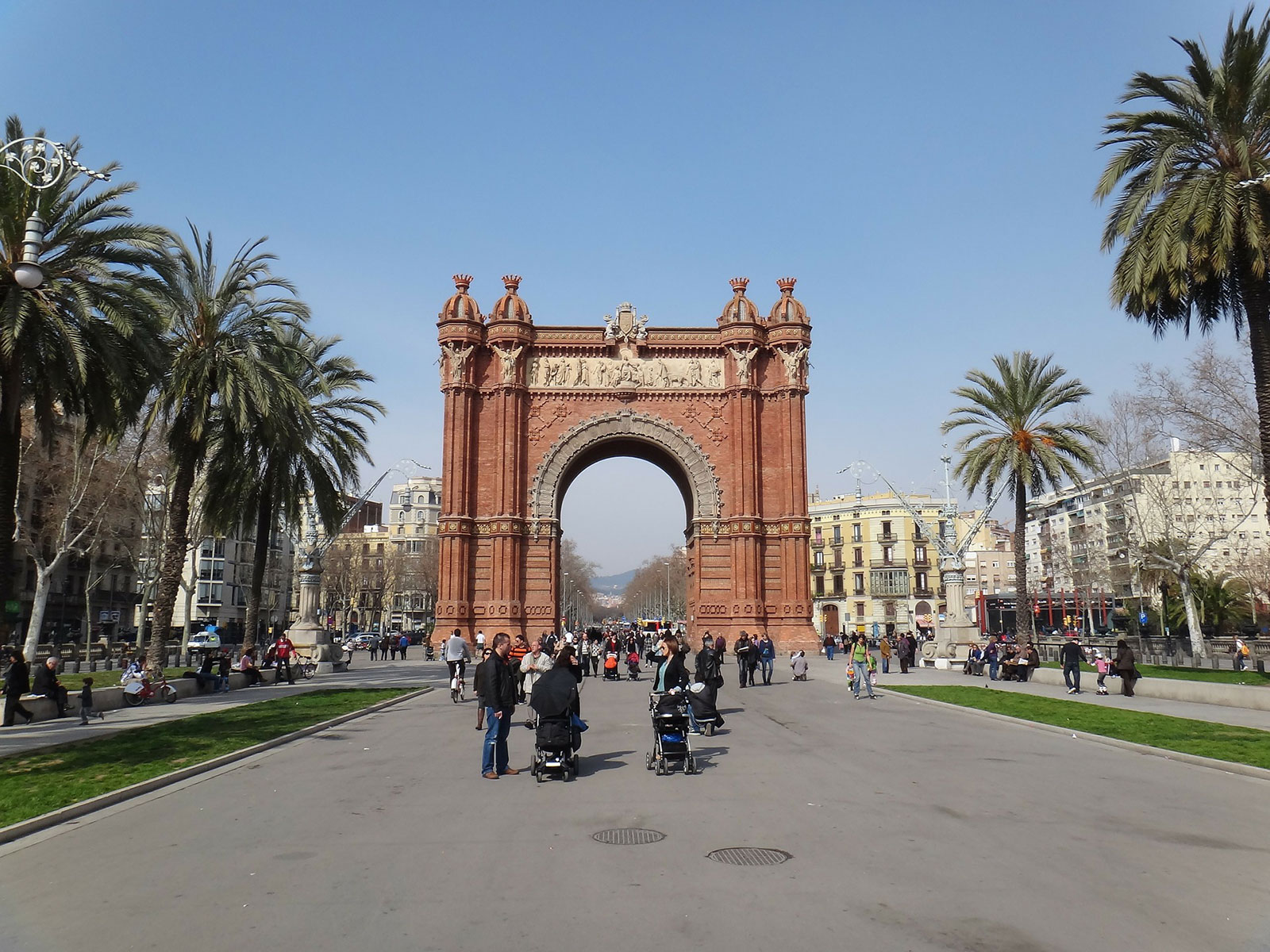