When Tourists Turns Into Eco Volunteers by Chance

When Tourists Turns Into Eco Volunteers by Chance 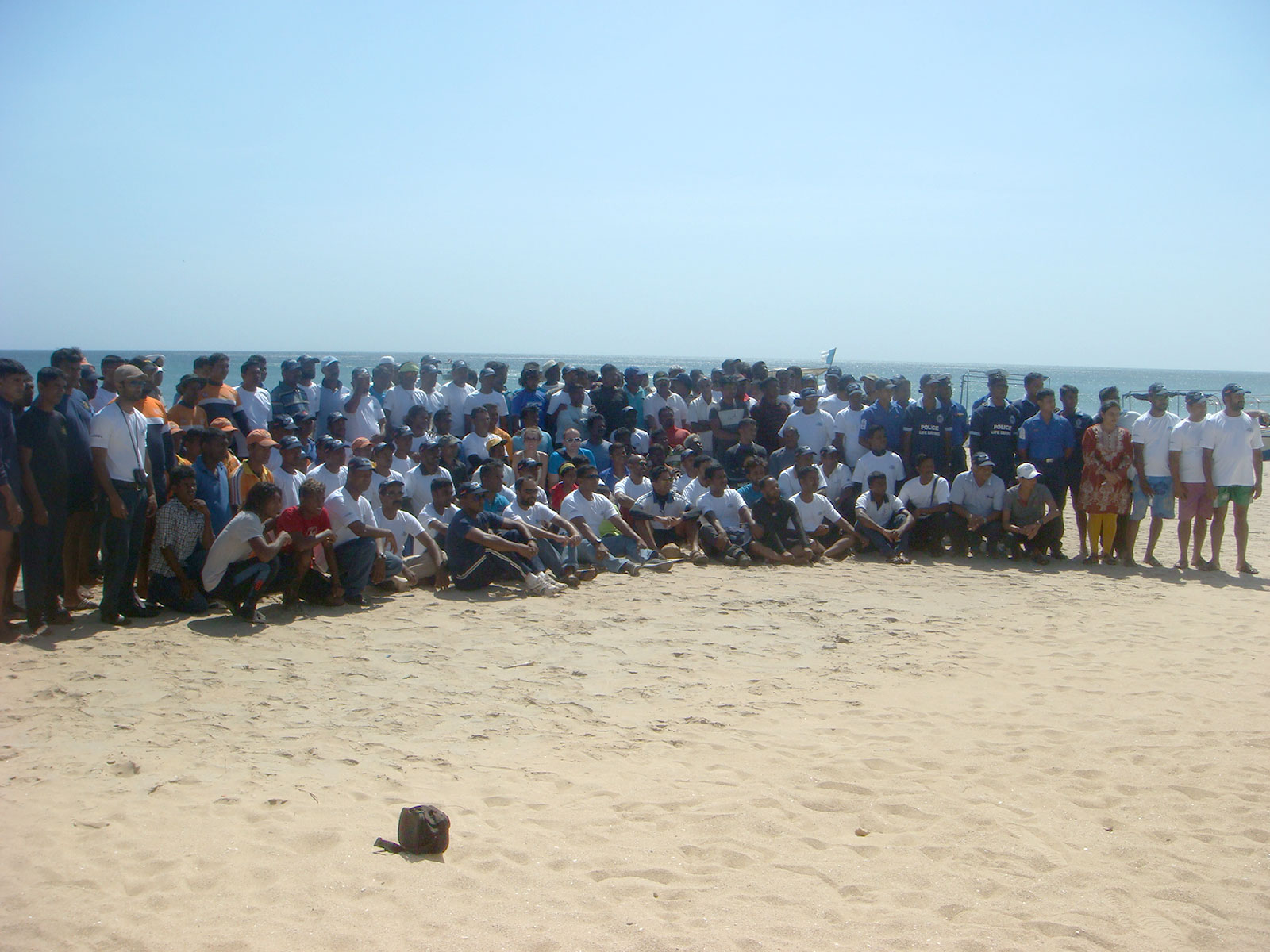 Ecological Volunteers on the Nilaveli Beach

Sri Lanka is a magical piece of Earth, no doubt about it. So small in area, but so huge in attractions. Intrigue historical monuments, beautiful highlands, spectacular beaches, vibrant nightlife, interesting Asian and colonial history, world famous tea, and much more. On top of all, it is an all year destination, because there is always a sunny part of Sri Lanka, whether that is the East or West part of this magnificent island. So, could Sri Lanka do any better? Sure it can, but sometimes things have to turn from bad to great. You just have to stay positive and try to make the best of every situation.

My wife and I spend our honeymoon in Sri Lanka. The first two weeks of our trip were in a rush – we visited Colombo, Kandy, Nuwara Eliya, Dambula, Sigiriya, Polonnaruwa, and we decided to relax for 5 days. It was September, so almost an obvious choice for relaxing was Nilaveli beach at North-East part of the Sri Lanka. Nilaveli beach is a beautiful long coastal stretch with fine golden sand. Due to the Sri Lankan Civil War, which ended in 2009, Sri Lanka North is mostly underdeveloped, including the Nilaveli beach area. September is the end of the dry season at The East coast, so this was another reason why there weren’t many tourists. We often had kilometers of beach just for us. Nilaveli beach in September is a perfect place to enjoy a silence and relax. 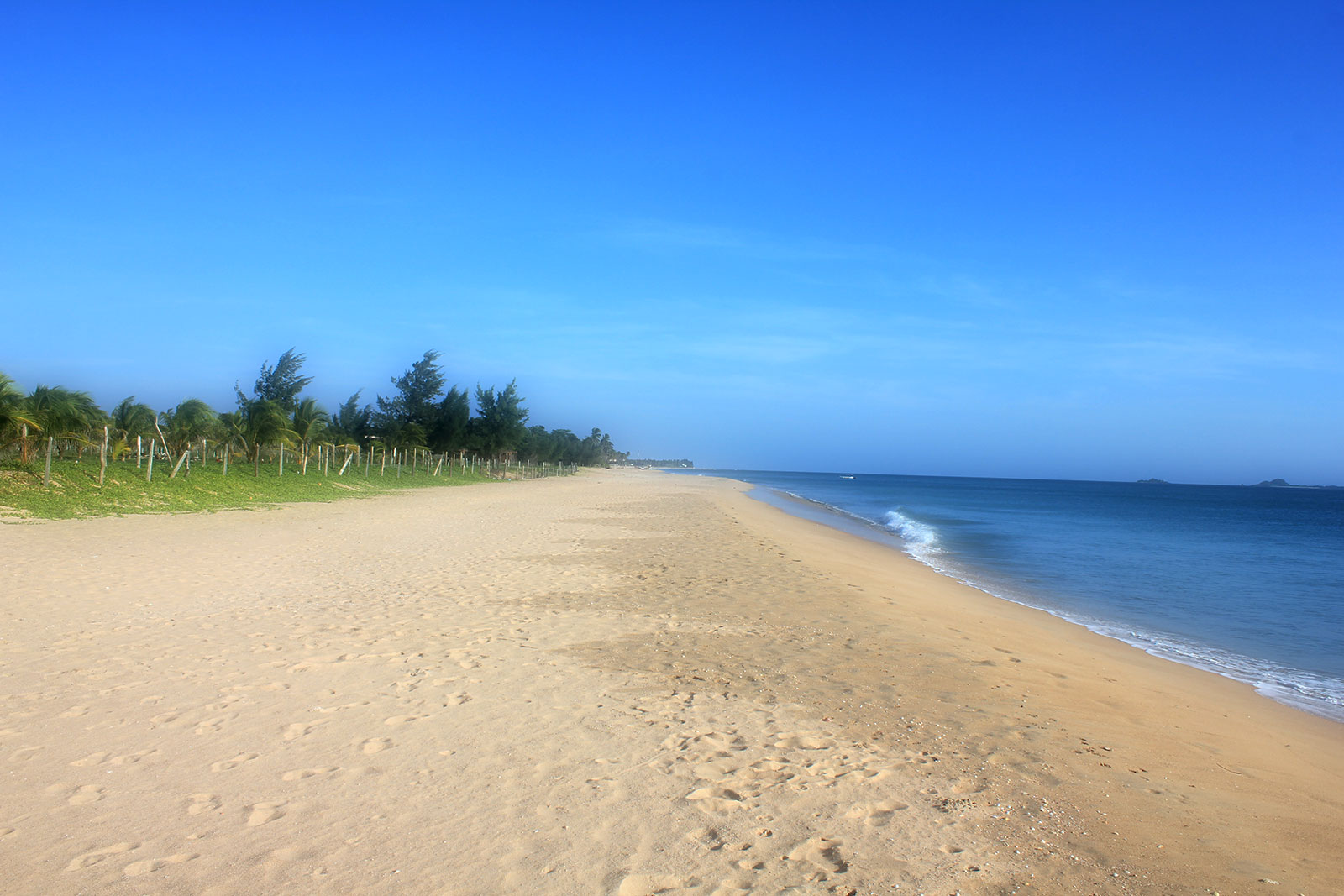 Nilaveli beach is great for one more reason – there is a magnificent Pigeon Island just 1 kilometer off the coast of Nilaveli. Pigeon Island National Park has one of the most spectacular coral reefs in Sri Lanka thus, it is great diving and snorkeling spot. Diving there was on my to-do list. Due to my laziness (too much relaxation took its toll, what can I say) and because one of the diving shops lied to me, I left the last day of our stay in Nilaveli to do diving at Pigeon Island. When I checked diving shops just a day before, I was terrified to find out that diving shops can’t organize diving at Pigeon Islands for the last day of our stay. On that day was “International Coastal Clean-up Day” organized by Sri Lanka Navy, and several environment and wildlife protection organizations. This annual environmental action gathers the army, police, biologists, dive masters, and volunteers to clean Pigeon Island National Park from garbage. Also, part of the reefs protection job includes removing crown-of-thorns starfishes, because they are fed with corals. An individual starfish can consume up to 6 square meters (65 sq. ft.) of living coral reef per year.

Staff from all diving shops were required to take part in this action, so there wasn’t scheduled diving for that day. I was devastated because this was my opportunity to be face to face sharks for the first time in my life. Blacktip reef sharks are frequently seen around Pigeon Island, and I was looking forward to seeing them swimming next to me.

Then, it crossed my mind: “We can be part of this interesting project!” I asked the staff in a diving shop if my wife and I can come tomorrow to help, and they agreed. But they said that the final word about our involvement will be given by the Army.

Next morning we came to the meeting point on the beach full of hopes and fears about how they will accept us. As soon as we arrived all the fear was gone. We were warmly welcomed by dozens of people who were already there. Then we were introduced to the Army officials. When we approached their table photo and TV cameras were pointed at us. We shook hands with officials and they invited us to sit with them. There were Admiral and few other highly ranked officers. We talked about the Civil war in Sri Lanka, nearby naval base, environmental projects they run, about our country, and other not so official stuff. All the time reporters were taking photos and filming our conversation.

At first I was very confused, because the last thing I expected on my honeymoon was “meeting”, even unofficial and relaxed, with Army officers. A TV crew asked us to pose while shaking hands and talking, so they made us feel like we are the President and First Lady in official visit to Sri Lanka. Though, in this kind of situations they usually wear a suite and dress, not swim suites and flip-flops.

This meeting was so surprising to me, that I didn’t even dress my shirt. I was feeling uncomfortable, because I didn’t know if our outfits would be offending or if we would say something wrong, so we mostly stuck to the environmental issues. I guess, it is least likely to offend someone when talking about sea pollution, sea life, and corals.

Soon we discovered that our discomfort was completely baseless because both Army officers and volunteers were very relaxed and pleasant. They showed us that officers didn’t have to be gloomy and serious, but they can be cheerful and in a good mood. Our hosts honor us with first row seats during a presentation about the project. Although we didn’t understand a single word, we tried to understand what they were talking about from the graphics. 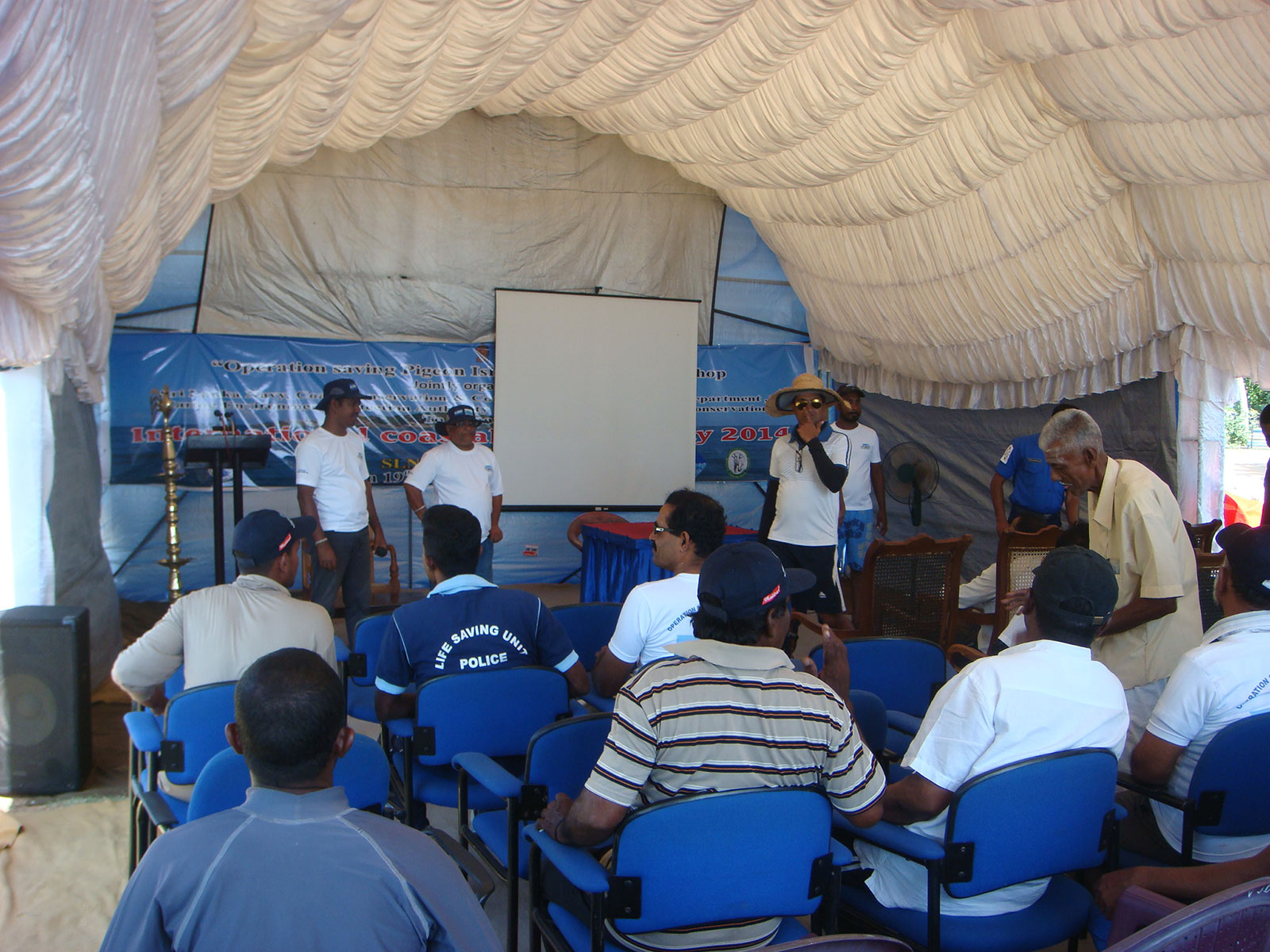 Presentation at the beach

Speakers talked about how garbage affects marine life and what local communities can do to prevent sea pollution. The biologist explained how to remove crown-of-thorns starfishes safely because their thorns are venomous, and if not removed properly they can spread dozens of eggs. There were more than 100 local volunteers, so this was a great way to raise awareness about environmental issues.

We were only foreigners, so we kind of justified “international” prefix of this event. As our hosts explained to us, our appearance was important to them, because it shows that foreigners are concerned and want to protect wildlife in Sri Lanka. At this point, our feeling of pride and responsibility was at its peak. 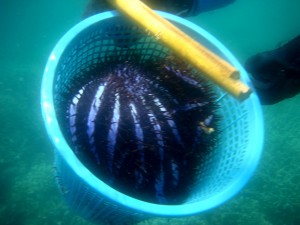 Crown-of-thorns starfish removed from the reefs

After presentations were finished, we were on our way to the Pigeon Island. As we approached the island our excitement grew, because we felt that we are part of something useful and interesting. I had an amazing time diving and my wife snorkeling. We saw a lot of interesting marine life, including few adult blacktip reef sharks. But that wasn’t the highlight of our visit to Pigeon Island. It was our involvement in this natural heritage protection project. After we saw the beauty of wildlife around Pigeon Island, we were even more delighted to help people of Sri Lanka to clean their reefs from crown-of-thorns starfishes, and island from garbage. Our contribution wasn’t huge, but it was important, for us, and for them. Little things can be big if you look at the wider picture.  Don’t be just a tourist in a foreign country. You can also try to make an effort, no matter how small it is, to make that country better for other people and for your children.