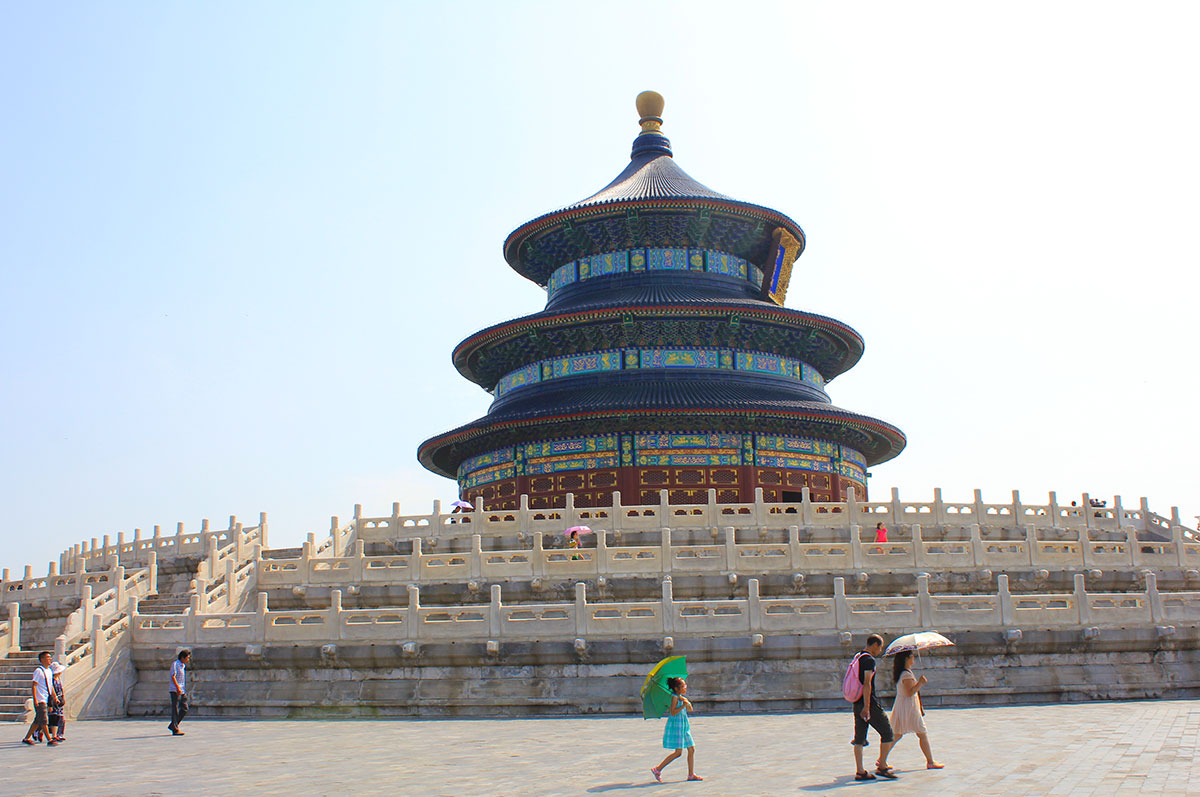 Recommended tour of the Temple of Heaven is in the direction from south to north, and therefore, you should enter the temple at Zhaoheng Gate (South Gate; 昭亨门; Zhāo Hēng Mén). After you pass the gate, you will come across Circular Mound Altar (圜丘坛; Huán Qiū Tán), which is enclosed with the two walls, the inner and the outer, symbolizing heaven and earth. It was founded in 1530, by the Emperor Jiajing and was used for giving thanks to Heavens and expressing hopes for the better future. It has three layers, and the number 9 dominates in every way; 9 circles, 9 stones, symbolizing the power and dignity of the emperor. Besides its quite specific and interesting shape and style, one of the most peculiar features of the Circular Mound Altar is so called Supreme Ultimate Stone, which gives the impression of communicating with gods when standing on it and talking, due to the acoustic resonance. It is the reason why the

Worshipping Heaven Ceremonies were held on this stone in ancient times, giving the impression of reaching the heavens, and directly talking to their gods.

Right behind the altar there is Imperial Vault of Heaven (皇穹宇; Huáng Qióng Yǔ). It was also founded in 1530, by the Emperor Jiajing, and it was used for ceremonies made in the honor of the gods. The most important feature is the Echo wall (回音壁; Huíyīn Bì), being one of the biggest wonders of the temple. It is specific that when you whisper, it is carried along its entire length. It is also specific for many other reasons, so if you knock at it, you will hear the sound, but it is impossible to make a hole within it. Near to the Echo Wall, there is so-called Triple Sound Stone (三音石; Sān Yīn Shí), which is one more attraction. It consists of the three tables of stone, and the sound produced on the first stone has a single echo, the second double and third triple. These three echoes can be heard thanks to the different distances of refraction of sound waves from the wall.

In the direction to the north, there is Danbi Bridge (丹陛桥; Dān Bì Qiáo), a 360 meters long and 29.4 meters wide road between the Hall of Prayer for Good Harvest and Imperial Vault of Heaven. It is actually just an ordinary path, but since the tunnel passes bellow it, it is called bridge. Though it leads directly to the Hall of Prayer for Good Harvests, you should resist the temptation to go there immediately, but rather turn left to West Annex Hall. The building complex there will definitely be a huge surprise, and some of the buildings like Fasting Palace, Bell Tower, Beamless Palace, and Divine Music Administration are definitely worth visiting.

Fasting Palace (斋宫; Zhāi Gōng) or Palace of Abstinence served for the emperors to abstain from food before the Worshipping Heaven Ceremony started. It consists of several different buildings, and one of the most interesting is The Pavilion of Fasting Bronze Figurine. It is a three meters high building, which has a stone foundation inside, reserved for placing the bronze statue. This statue served to the emperors to remind them of the fasting rules since it would hold a plaque where the rules of the fast would be written. Beamless Palace represents the main entrance to the Fasting Palace, and here the emperor would make meetings with ministers during the fast. In general, it covers an area of 40,000 square meters and is surrounded by two walls, the outer brick, and the inner purple wall.

Divine Music Administration (神乐署; Shén Yue Shǔ) was the most important ritual music academy during the period of Ming and Qing Dynasties, and one of the major structures of the temple. It was built in 1420 and covers an area of 10,000 square meters. It served for conducting training for performers of sacrificial music and dancing since music was inseparable from the rituals.

After visiting Divine Music Administration you should go back to Danbi Bridge and finally visit the main attraction of the temple, the Hall of Prayer for Good Harvests (祈年殿; Qínián Diàn). It is set in the northern part of the temple, and it is one of the most appealing architectural attractions. It is completely made of wood without a single stone, a nail or a wedge. Twenty-eight wooden poles carry the whole construction of the temple, and they are also made from a single piece of wood. Four pillars with carved dragons in the middle are 19.2 meters high and symbolize the four seasons, also called Dragon-Well Pillar. Twelve columns in the second round are the symbol of 12 months and 12 poles in the third round represent 12 parts of the day and night. At the center of the floor of this hall, you can see a piece of a specific natural marble whose patterns look like dragon and phoenix. At its peak in the center, a parallel stone of dragon and phoenix can be found. On the eastern side of the pavilion there are the two screens, chairs, and tables on which plates with records of ancestors of the emperor were stored, and on the west side of the pavilion, the emperors were resting after the imperial ceremonies.

From the east side of the Hall of Prayer for Good Harvests, there is the Long Corridor (长廊; Cháng Láng), right beside the North Divine Kitchen (北神厨; Běishén Chú), up to the North Butcher House. The Long Corridor is 350 meters long and 5 meters wide, and it is also called Seventy Two Corridor, because of the number of the room with the same roof and the back wall. It is basically the first thing you see when you enter the temple, and it is quite interesting because of all paintings and carvings. Before the ceremonies, it would be lit by lanterns, and everything that was to be sacrificed would be brought through it to the altar. The North Divine Kitchen serves for making offerings, and all the kitchen appliances are available within it. The most important feature of the kitchen is Sweet Spring Well, with sweet and cold water at the same time, which was used for cooking the offerings. It was believed that the water could reach the heavens, thus, it was mellifluent and incredibly sweet. The butcher house served for preparing the animal sacrifices, and it is likely that the animal sacrifices were beaten with mallets, rather than butchered with knives, thus the name the Pavilion for Beating Animal Sacrifices. It consists of five chambers in the width, and tree chambers in the depth, with an interesting Xie Shan roof.