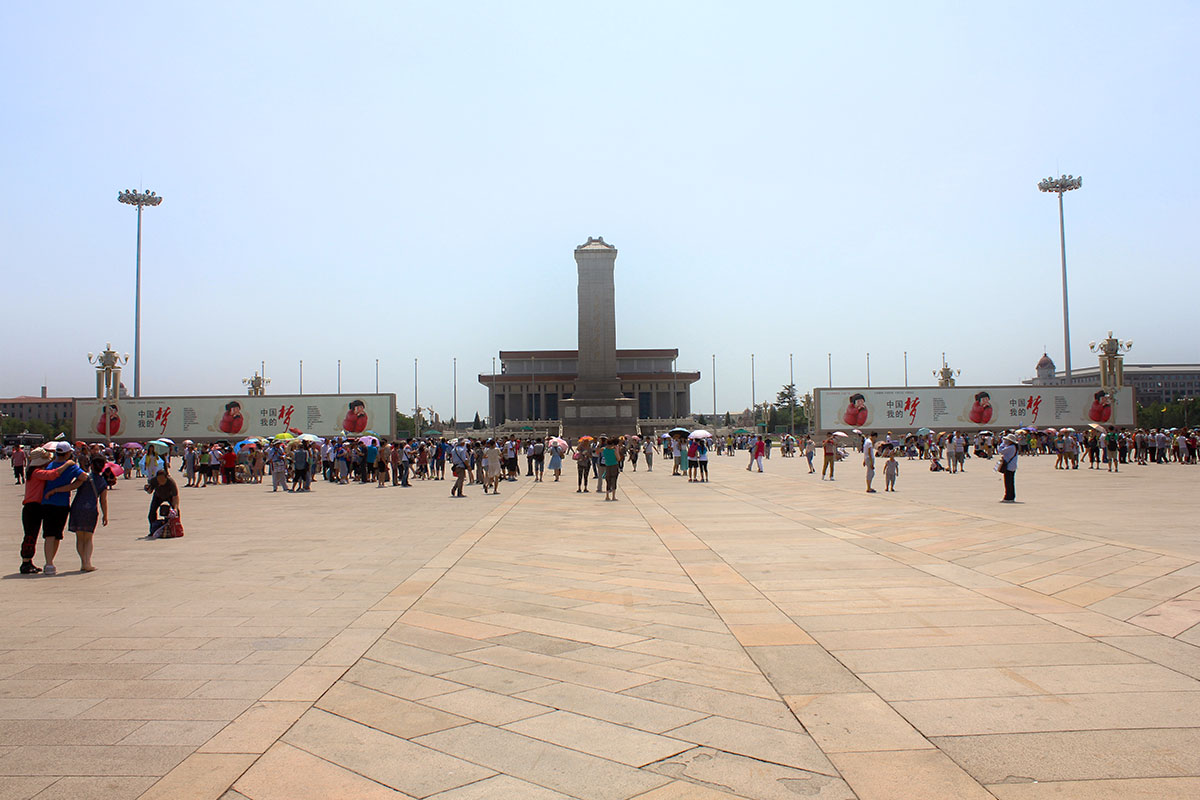 Tiananmen Square (天安门广) is south of the Forbidden City and it is good starting point for visiting surrounding attractions. Covering an area of 440,000 m² (44 hectares ) it is one of the world’s largest public squares and a must see for all Beijing visitors.

It dates from 1415 during the Ming Dynasty. It was damaged or destroyed several times, yet again redesigned in 1651. Since then, and up to 1950s it changed and enlarged several times. This enormous square can hold over one million people.

North of the Tiananmen Square is the south gate (Meridian Gate) of the Forbidden City, the only gate where you can enter this magnificent former imperial palace. The National Museum of China is also here, that is, on the east side of the square.

In the center of the square, there is the granite Monument to the People’s Heroes (人民英雄纪念碑; Rénmín Yīngxióng Jìniànbēi), built from 1952 to 1958. This monument is devoted to the modern China heroes, who died during last revolutions in China. “Eternal Glory to the People’s Heroes” is the quote by Chairman Mao engraved on it.

The Chairman Mao Memorial Hall (毛主席纪念堂; Máo Zhǔxí Jìniàn Táng), also known as the Mausoleum of Mao Zedong, is mausoleum where a father of the People’s Republic of China is placed. The body of Chairman Mao is placed in crystal coffin and displayed for the public. Hundreds of people come here every day to pay respect to the founder of modern China. Construction of The Chairman Mao Memorial Hall started shortly after Mao’s death on September 9, 1976, and finished within 6 months.

This square is also known for the massacre that occurred in June 1989, when Chinese troops went through the square, firing into the protesters who were gathering there for several weeks to protest for democracy and the resignation of Chinese Communist Party leaders. Though the exact number of victims is not familiar, it is estimated that there are around 300 and maybe up to thousands.

To get to the Tiananmen Square you will have to pass the security check, and you will be watched through the lenses of hundreds of cameras placed on the square. Square is opening in sunrise and closing in sunset time. Closing time is at about 17:00 during the winter, and at about 19:00 during the summer months. An interesting military ceremony is performed every day during the opening time.