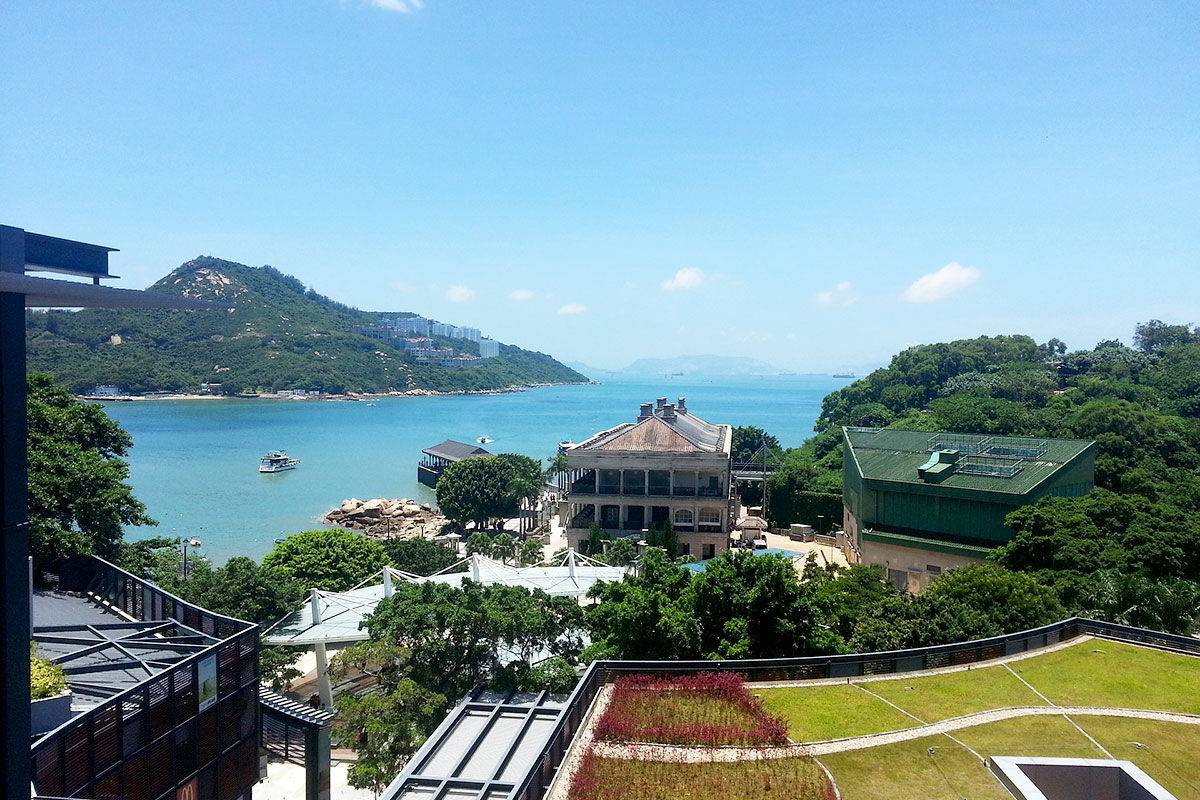 The six-storey complex Stanley Plaza (赤柱廣場) links the Stanley bus stop at the highest level to the Murray House and main promenade. Murray House (美利樓) is one of Hong Kong’s oldest colonial buildings originally built on the current site of the Bank of China in Central. It was constructed in 1846 as officer’s barracks and named after Sir George Murray, British Head of Ordnance at the time. The building was pulled to pieces, brick-by-brick, cataloged and put into storage in 1982, to be restored again on Stanley waterfront in 2001. Even though more than 3,000 building blocks had been labeled during the act of the dismantlement, when it was restored six extra pillars were left, and today they are used in front of the building as an art installation.

Adjacent to Murray House stands Blake Pier (赤柱卜公碼頭), another structure that has been relocated from its original construction site. It was known as Pedder Warf, but it was renamed after Sir Henry Arthur Blake, the twelfth Governor of Hong Kong. The government made a decision to destroy the Blake Pier in 1965. The first things to be dismantled were the pavilion and its iron-steel roof, being afterward relocated to the Kowloon. The structure was once again brought to the Stanley waterfront, in order to serve as a public pier again, with the original top canopy, and the underlying pier of modern construction. The pier is now in use by a ferry service between Aberdeen and Po Toi Island.

Only a few minutes’ walk from Murray House is Stanley Market (赤柱市集, 10:00-18:30), one of the most visited street markets in Hong Kong. The market is popular with both tourists and locals, well known for its bargains. The market gets particularly busy at weekends. Expect to bargain in most of the shops. Many shops can be found there, especially for clothing, including mainly silk garments and traditional Chinese dresses, but besides clothes, you can find many interesting things like souvenirs, ornaments, paintings, Chinese arts in general, or some toys and different gadgets. A few Chinese restaurants will definitely get your attention you if you get hungry, as well as some open food stalls.

When the walk around Stanley Market is finished, you can continue exploring Stanley by going along Stanley Waterfront (赤柱海濱長廊). An attractive boardwalk has been constructed in 2008, therefore making a huge redevelopment of the waterfront area, creating a broader space for public pleasure between Stanley Main Street (赤柱大街) and the bay. The boardwalk is surrounded with many trees and benches. Along the waterfront, you may find restaurants, places where you can get a cup of coffee, or enjoy a cold drink. Such places are usually full of locals and tourists who enjoy spending their free time, experiencing the beauties of the sunshine, water, and a great cuisine.

Stanley Plaza (赤柱廣場; 23 Carmel Road; 8:00-23:00; www.stanleyplaza.com) offers a shopping arcade and a community amphitheater, placed on the outside. Inside Stanley Plaza, you can find fashion stores, beauty salons, bookstore, supermarket, wine store, home furnishing stores, pharmacy. There are number of dining options, most of which are fast-food restaurants. From the higher level, you may enjoy the amazing views of Stanley Bay. Stanley Plaza is equipped with facilities for dogs, so expect to encounter many dogs.

Stanley Ma Hang Park (赤柱馬坑公園; 7:00-20:00; free) is a park which offers many interesting things on its 50,000 square meters located near Murray House, into the cliffside. The park was opened in 2011. It features boardwalks and various thematic zones such as Butterfly Garden, Heritage Corner, Fitness Deck, Bird Watching Corner, Educational Trail, wind turbines and Sea View Terrace, and Sea Breeze Patio. Within the park, there is Pak Tai Temple. Park is well marked, with signs that help to identify plant species, birds, and butterflies along the way. Created in the way to blend in with the natural landscape, this park will amaze you with the views from the platforms/terraces over Stanley Bay area, and when the day is bright and the sky clear, this enjoyment should not be missed.

Hong Kong Correctional Services Museum (香港懲教博物館; Tung Tau Wan Road; Tue-Sun 10:00-17:00; free) exhibits darker side of Hong Kong. In 480 square meters collection of more than 600 artifacts tell a story about over 170 years long Hong Kong’s criminal past. The museum’s main building has 10 galleries including a mock gallows, two mock cells, and a mock guard tower. It also offers varieties of products created by prisoners of the nearby Stanley Prison in an Annex. There is a lookout point outside of it, where visitors may enjoy the landscape of Tai Tam Bay.